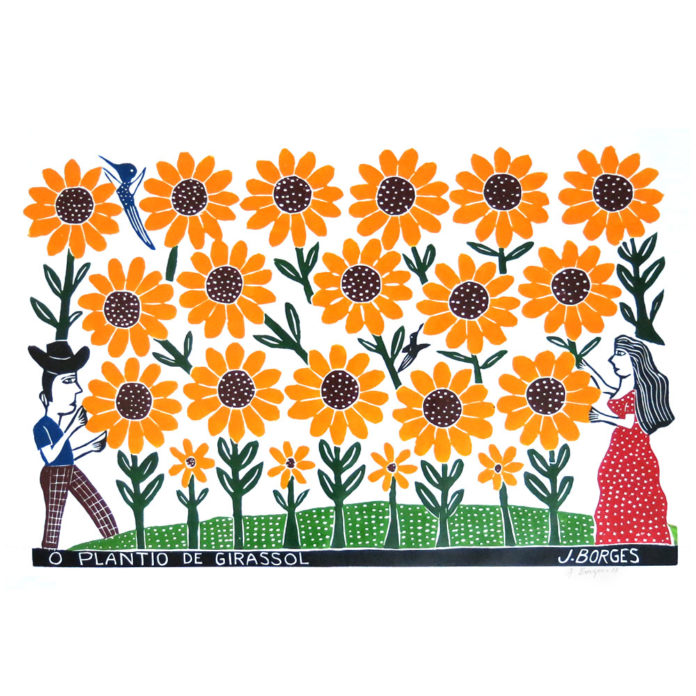 Master J. Borges has a recognizable style of woodworking. J. Borges (José Francisco Borges) is a poet and an engraver. He was born in 1935 and still lives in the town of Bezerros, in the Brazilian northeastern state of Pernambuco.

This true Brazilian artist began his career as a woodcutter, making the covers of his own “cordial leaflets“, a popular literary genre usually written in rhymes. Corel literature and leaflets are popular Brazilian art that is affordable to the general population: printed booklets or pamphlets containing folk stories, poems and songs. This art is particularly popular in the Northeast region of the country, being sold in public spaces such as town squares and street markets.

Later he invested time and money towards creating bigger works, which were proper engravings themselves. He worked passionately, staying true to the culture of his people and artistically representing an expression of their being.

Praise and Recognition of J. Borges

He has won numerous awards, including the UNESCO Prize in Educational/Cultural Action. In 2002, he was one of thirteen artists chosen to illustrate the UN’s annual calendar. In 2006, J. Borges and his work were the subject of an in depth report in The New York Times. Since then, he is considered to be part of the Living Heritage of Pernambuco, a title granted by the State Government.

His work is found in museums, galleries and collectors’ residences all over the world, portrays the daily life of the poor, the enamoured, the cultural beliefs in gods and punishments from the sky, the mysteries, the miracles, crimes, corruption and religion that embody Brazilian culture. In short, J. Borges was able to represent in his work, the entire cultural universe of the Northeastern Brazilian people.