Why is Serra da Capivara famous for their ceramics?

First of all, Serra da Capivara is in the Brazilian state of Piauí. This state is located in the economically poorer, Northeastern region of the country. However, Serra da Capivara is one of the nation’s most renowned archaeological sites where a wealth of ancient rock formations, paintings and artefacts have been preserved for millennia. This area has the largest concentration of prehistoric sites in the Americas. Scientific studies confirm that the Capivara mountain range was densely populated in the pre-Columbian Era.

In today’s Serra da Capivara, exists a unique community of artists in a place called “Barreirinho”, that through a collaborated effort, authentically reproduce prehistoric rock paintings on beautiful, utilitarian ceramics.

This special community of artists is the Capivara Ceramics Project, located within the national park. These pieces are becoming more popular and it’s due to their high functionality, accompanied by their added social value that contributes to the development of the region and protects the cultural and ecological heritage of the National Park. These Brazilian artisans are here to prove that you can have beautiful, politically correct, sustainable and socially just products, all at the same time! What a wonderfully successful example of sustainable entrepreneurship, environmental preservation, social inclusion and empowerment.

In 2005, Capivara Ceramics Project won first place for the best sustainability project in Brazil, awarded by the Brazilian Business Council for Sustainable Development (CEBDES). As a major backbone to the community, the project supports the cultural and environmental conservation of the region, while serving as a crucial income source to those involved. All the pieces are produced under strict regulations issued by IBAMA, the Brazilian Institute of the Environment that periodically supervises the operation.

Today, the project has expanded its efforts and is sharing its successes through training other communities and groups. These groups have similar potential for working with artisanal ceramics. Capivara Ceramics Project exemplifies peer empowerment and sustainability.

Are you interested in learning about more ceramics in Brazil? Check out this blog post on Marajoara art!

Need some utilitarian culture in your home? Buy some beautiful ceramics from the Capivara Project at TheFOB! 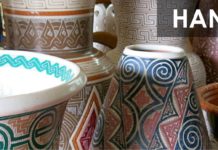